In recent posts I described the need for spill – releases from reservoir storage to increase the number of young salmon reaching the ocean.1 Last summer and fall, Sacramento River salmon were forced to spawn nearer Shasta Reservoir because of limited cold water releases to save reservoir storage in the ongoing drought. Instead of the normal 50 miles of cool water, the salmon only had 10 miles. This winter, the young salmon that spawned in the Sacramento River near Shasta and survived now have to contend with minimum Shasta releases, since most of the reservoir inflows are being stored for future water supply. The winter flow pulses that stimulate emigration and carry the young salmon 300 miles to the lower river, Delta, Bay, and ocean are missing from the spawning reach below Shasta (see Keswick Outflow in chart below).

In contrast, millions of Battle Creek hatchery salmon released 30 miles below in the Sacramento River have the advantage of local inflows from un-dammed tributaries (Bend flows in the chart) to carry them to the ocean. (Note: hatchery fish releases are often timed to flow pulses.2) From the chart below you can see that these inflows have actually been higher than releases from Shasta Reservoir.

In the previous posts I had suggested spills (releases) of 5-10 % of reservoir inflows to increase salmon survival in the current drought. So far this winter, a reasonable prescription would have been several days of 500 cfs spill each time reservoir inflow approached or exceeded 10,000 cfs. A 500 cfs spill would represent a 12-15% increase in streamflow to stimulate emigration of young salmon downstream into the higher flow reach of the river. This would certainly qualify as an adaptive management experiment to help improve survival of endangered salmon in the Sacramento River. 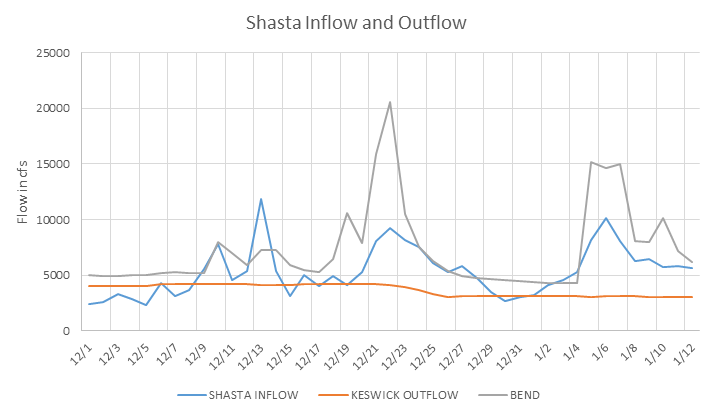 Inflow and outflow from Shasta Reservoir in December 2015 and early January 2016. The Bend Bridge gage is on the Sacramento River near Red Bluff, CA, approximately 30 miles below the Keswick Dam gage. Sacramento River flow at Bend Bridge includes the inflow from Cow, Clear, Cottonwood, and Battle creeks.