The beginning of this water year (early winter 2015-2016) may mark the last viable spawning migration of Delta Smelt in the San Francisco Bay-Delta Estuary. Remnants of the Winter Run salmon population below Shasta are also passing downstream through the Delta to the Bay and Pacific Ocean. Two moderate storm periods in the Central Valley so far this winter have driven Bay-Delta hydrology, Low Salinity Zone dynamics, salmon emigration, and the remnant Delta and Longfin smelt spawning runs. Moderate exports (4000-6000 cfs) from the South Delta pumps have also had to their effects, as has the annual winter closure of the Delta Cross Channel. Together these “forces” provide a picture of a key dynamic period of the Bay-Delta Estuary ecosystem as well as to how to better manage the system for the benefit of everyone including the endangered smelt and salmon.

The winter started with drought conditions exemplified by low freshwater inflow and outflow in the Delta, and the Low Salinity Zone sitting far upstream in the Delta. Exports from the South Delta were minimal. Then came two major storm periods of moderate freshwater inflow that changed everything. The first peaked around Christmas and the second on January 9th (Figure 1). With the Delta Cross Channel closed, most of the storm water passes down the Sacramento River channel to the eastern Bay (Figure 2). 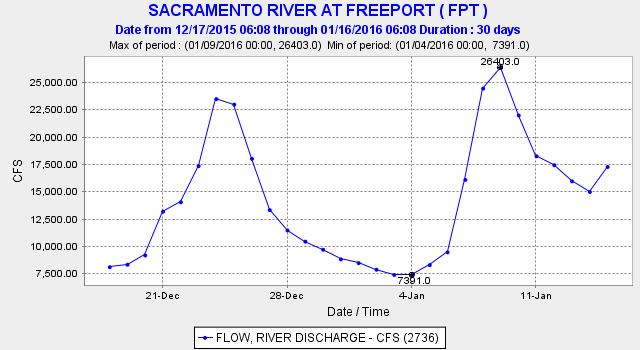 Salvage of Winter Run sized salmon smolts1 has increased with the storms and higher exports from the two South Delta pumping plants (SWP and CVP) (Figure 3). These salvaged Sacramento River salmon likely enter the Central Delta via Georgiana Slough and then follow net negative flows to the south Delta export pumps (red arrow in Figure 2). These negative flows are monitored as Old-Middle-River or OMR flows (Figure 4). 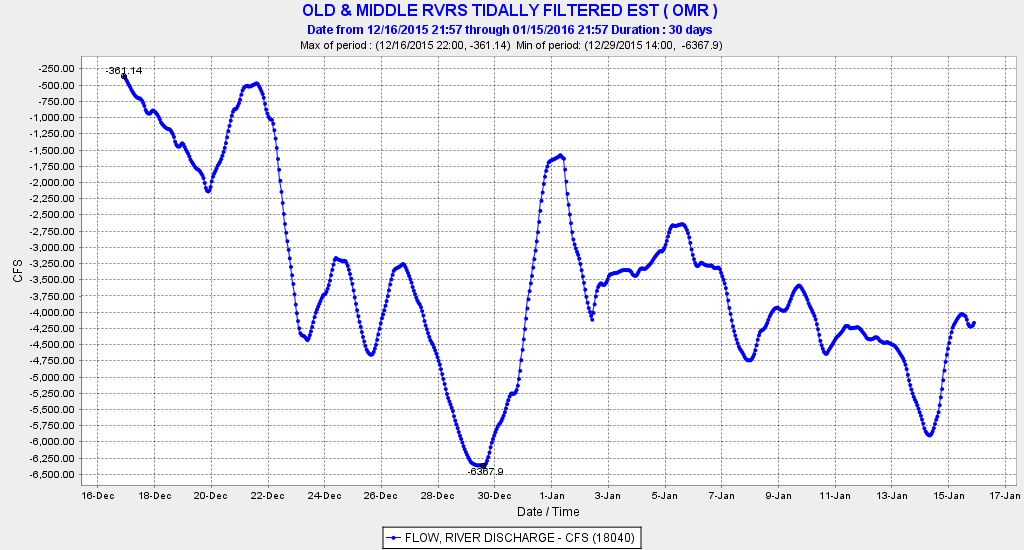 Adult Delta and Longfin Smelt enter the Delta from the Bay on their spawning migration during the first winter storm, attracted by the warmer, more turbid, higher storm flows. Being poor swimmers, they ride the flood tides into the Delta, staying nearshore on ebbs and moving out into the upstream currents on flood tides2. Because much of the upstream flood tide current is into the Central Delta (with high freshwater inflow in the Sacramento River channel – Figure 5), many smelt enter the San Joaquin channel, becoming “trapped” in the Central Delta and susceptible to moving with accentuated flood tides3 to the South Delta export pumps.

“Extremely high outflow in wet years can weaken or completely overwhelm the flood tidal signal in the Sacramento River and thus preclude or impair maturation and the reproductive output of spawning individuals (Kinnison et al. 2001; Bronmark et al. 2008). In such years, fish may choose to reproduce in suboptimal habitat or migrate up the San Joaquin River which has lower outflows, but this increases potential mortality by moving fish toward the water export facilities (Grimaldo et al. 2009).” (Bennett and Burau 20142) 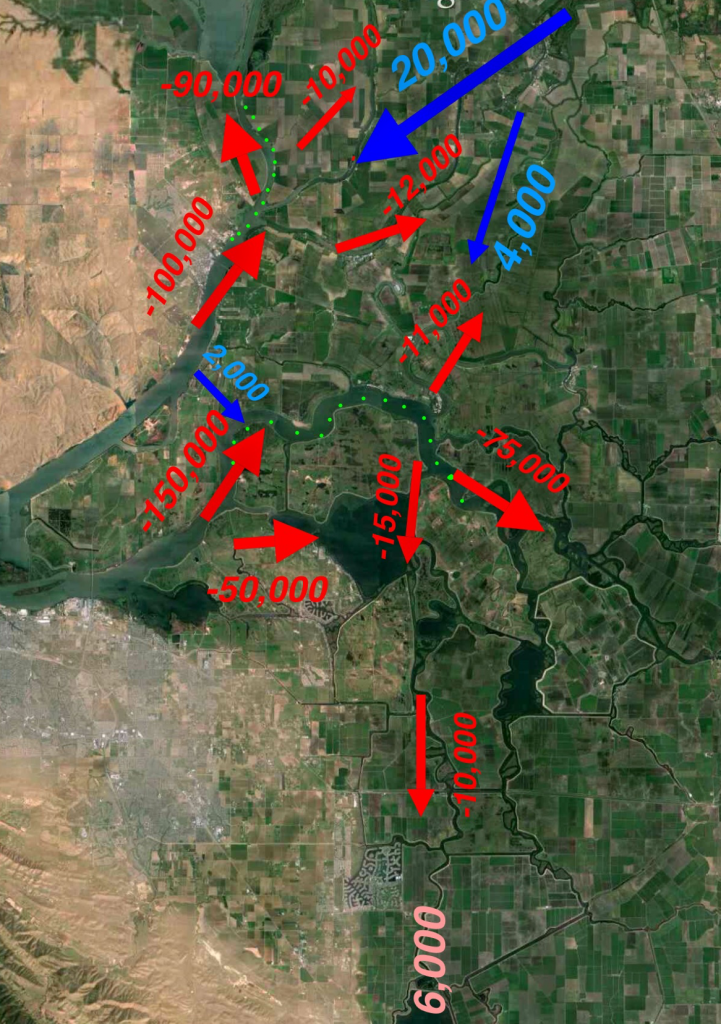 Minimizing Loss of Salmon and Smelt

Recently the Smelt Working Group recommended reducing South Delta exports and limiting OMR to being no more negative than -2000 cfs5 to protect Delta Smelt. In its Determination Under Component 1 of the 2008 OCAP Biological Opinion based on the Working Group’s recommendation, the US Fish and Wildlife Service6 set the limit at -3500 cfs from the existing -5000 cfs limit. “This will ensure more positive OMR values during the peak of flow and turbidity from this week’s storm. The Service believes that in light of the risk to Delta Smelt, the OMR flow proposal from Reclamation and DWR is prudent.” The Service had no real justification for revising the Working Group’s recommendation.

The Working Group had no recommendation based on Longfin Smelt, despite detection of larvae in the first larval survey of the year. Larvae were detected in low numbers in the San Joaquin channel of the Central Delta7 . Such detection is remarkable given few adult Longfin were collected in the December trawl surveys. (Note: Criteria for action remain expressed as density in surveys and salvage numbers, which should not continue as criteria at the present extreme low population level.) “Exports targeting -5,000 cfs OMR will slightly increase risk of entrainment through the week as inflow declines until predicted rainfall on Wednesday causes Delta inflow to rise again about Saturday. A USFWS implemented recommendation from the SWG of -2,000 cfs OMR would be highly protective of Longfin Smelt adults and larvae.” Note again that this recommendation was not adopted.

No determination as to the NMFS 2009 OCAP Biological Opinion for salmon has been made.

The Working Group was seeking to minimize the accentuated flood tides and exports to limit pulling the higher turbidity water and smelt into the south Delta near the export pumps. With smelt and salmon already present in the central Delta because of the lack of previous precautions, the Working Group recognized the higher risk from exports. Their recommendation was more protective than the Service’s subsequent determination.

So what else can or should be done given the Services determination? At a minimum: