On May 5, I reported on the “chumming of stripers” with the late season release of millions of hatchery smolts into the warm, low flows of the Sacramento and Feather rivers.  So what more could the state and federal managers do to improve conditions for our salmon, steelhead, smelt, sturgeon, and other fish resources?    They could start by obeying and enforcing the rules already on the books.

Because of the restrictions placed on South Delta state and federal water project exports by rules governing San Joaquin River steelhead, exports are now restricted to no more than about 2500 cfs.  Such low exports at this time of year have in fact been the norm for the past 20 years under water quality standards and endangered species biological opinions.  The steelhead biological opinion for the San Joaquin is relatively restrictive this year because of the San Joaquin’s dry-year designation.

So what is the problem?  Because it cannot export, the US Bureau of Reclamation is releasing minimum flows from the warm surface waters of a full Shasta Reservoir.

The Delta outflow-salinity standard under D-1641 requires salinity at Chipps Island to be no more than 2.64 mmhos on a 14-day running average; the most recent 14-day average is above 3.0 mmhos.  With minimal Sacramento River inflow, Delta outflow has reached as low as 8,000 cfs in early May 2016.  These conditions contribute to:

The standards (rules) governing the Central Valley rivers and Delta are there for a reason: to protect water quality, fish, and ecosystem function.  They do not contain the caveat: ‘Comply when convenient.’  They don’t have an exception that reads: ‘No Exports?  No Problem.  Release what meets your sense of order.’  With such gross disregard for the rules, it is no wonder our fisheries resources are in such a poor state. Water temperature in past month at Bend Bridge near Red Bluff. Note: in 2010, the last below normal water year, water temperature did not exceed 58°F during first 12 days in May. 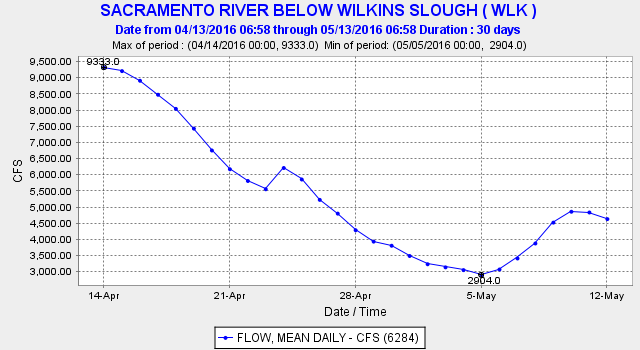 River flow in past month at Wilkins Slough below Colusa on middle Sacramento River. Note: flow was 7000-13,000 cfs during first 12 days of May 2010, the last below-normal water year