In 2010 Delta smelt started a two-year comeback after three years of drought.  The fourth lowest fall index on record (2009) brought a modest increase in the normal water year 2010 summer and fall indices that in turn led to the modest 2011 wet year recovery.  Another comeback may be in the making with the wet fall-winter of water year 2017.  After the record low 2015 summer and fall indices, and what were perceived to be record lows in 2016, the remaining smelt seem to be making a run of it this wet fall-winter as they did in 2010 (Figures 1 and 2).  In 2010 exports were constrained by the 2009 Smelt Biological Opinion (BO) limits on OMR of -5000 cfs or below (Figure 3).  Only one Delta smelt was observed in December and January at the south Delta fish salvage facilities that year (most likely due to the export restrictions).  So far this year prescribed export restrictions and recommendations from the Smelt Working Group on OMR flows per the BO have been ignored, in part due to relaxations allowed in the new water bill the President signed last week.  Exports and negative OMR flows remain high (Figure 4).  With such high winter exports and associated highly negative OMR flows, it remains to be seen if salvage numbers remain low (none so far) and a comeback occurs in 2017. 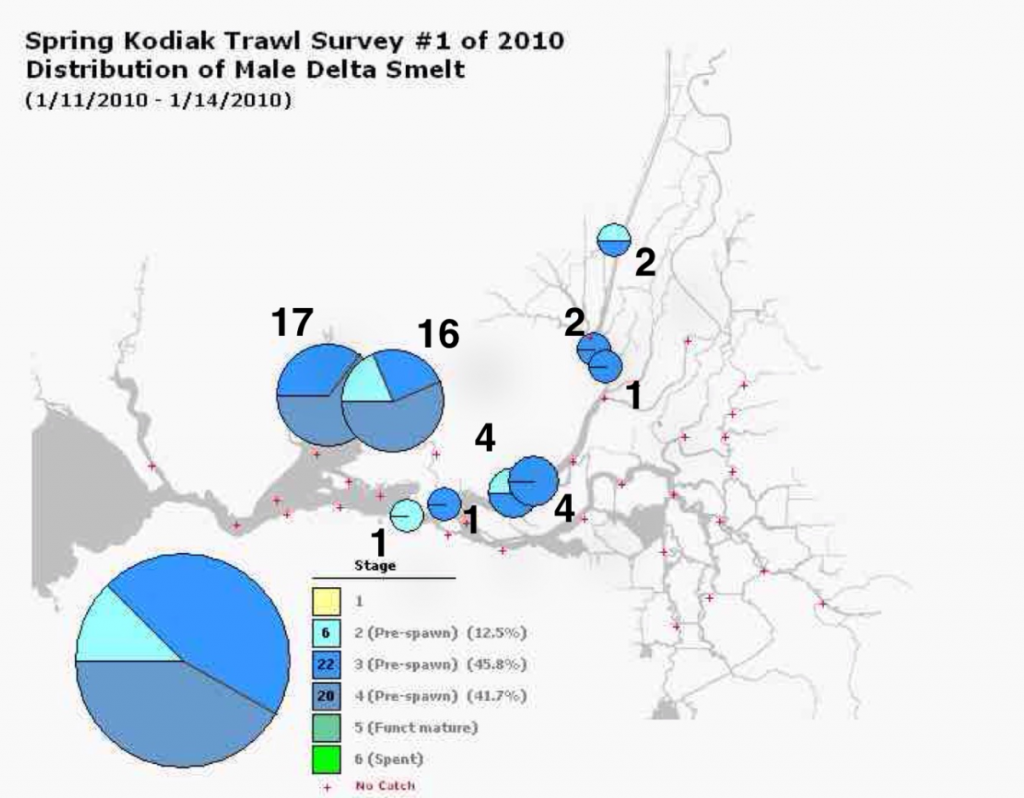 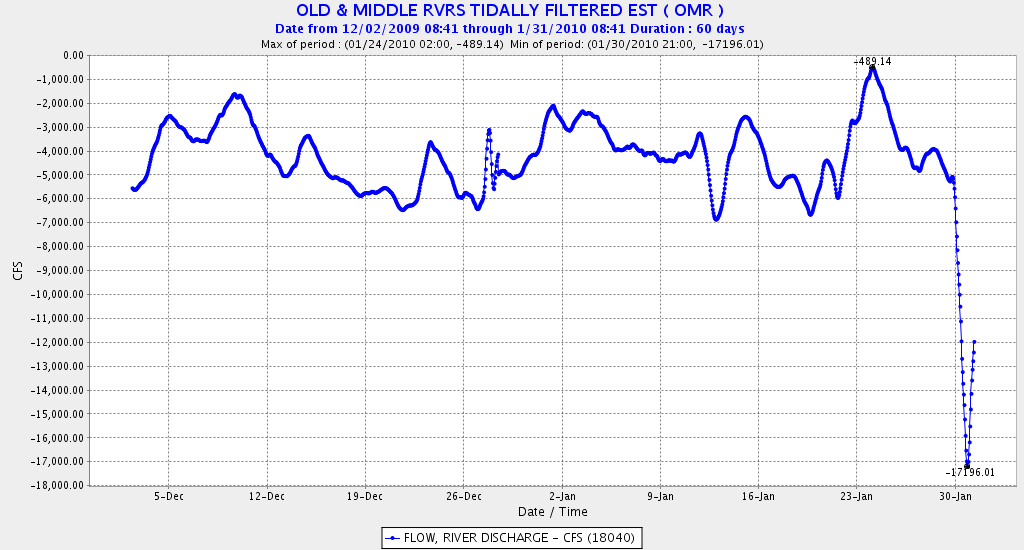 Figure 3. Old and Middle River net flow in the central Delta downstream of the South Delta export pumps 12/2/2009-1/28/2010. Negative flows are caused by reverse flows in these river channels toward the pumping facilities. Source: CDEC. Figure 4. Old and Middle River net flow in the central Delta downstream of the South Delta export pumps 11/21/2016-12/21/2016. Negative flows are caused by reverse flows in these river channels toward the pumping facilities. Source: CDEC.

Last week I opined about the lack of agencies’ (Smelt Working Group) concern relating to high Delta exports so far this December.  SWG:  “However, members are concerned regarding today’s OMR flow (daily average of approximately -10,000 cfs) and how it could influence the future distribution of the species. … The SWG expressed concerns regarding the current OMR flow (~-10,000 cfs). … A minority of the membership stated that we do not know what percentage of the population is currently at risk of being entrained; that entrainment into the OMR corridor could be occurring now and we would not know it. This minority indicated OMR should not exceed -5,000 cfs immediately.”  (Smelt Working Group 12/5/16 meeting).

I was incorrect to label it a lack of concern when it was really lack of management action.  The SWG had noted that two smelt had been caught in November trawl surveys in the lower Sacramento River near X2 (~2700EC), which was above km 81 and below km 85 on 12/5 (X2 actually reached km 95 on high tides by 12/10/16). 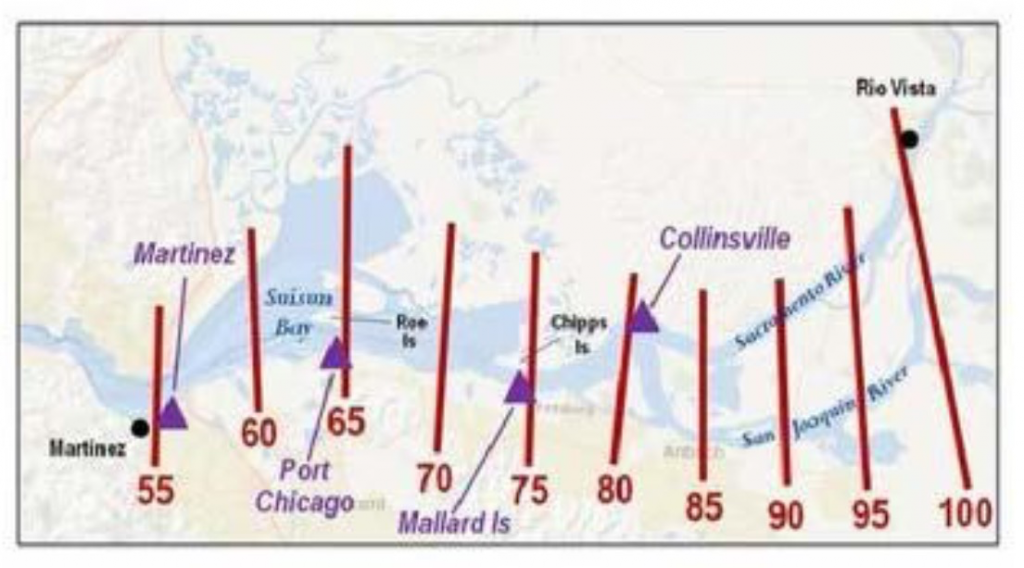 Kilometers above the Golden Gate Bridge in Bay-Delta estuary.

As it turned out, the minority recommendation was not adopted and high exports (~10,000 cfs) continued.

On 12/12 the SWG met again.  It noted recent higher exports, an upstream movement of X2 to km 90 (because of higher exports), and perhaps most important the capture of 221 Delta smelt near km 90 in a single trawl on 12/10.  Three Delta smelt were also captured in a trawl in Three Mile Slough (km 98).  SWG:  “Members indicated great concern that Delta Smelt could begin migrating upstream in the very near future, and find appropriate cues to move upstream on the San Joaquin River and into the sphere of influence of the pumps where the adults and subsequent young of the year will be at increased risk of being entrained into the Old and Middle River corridors, or even into the facilities themselves.”

At the 12/12 meeting, the SWG unanimously recommended reducing exports to limit OMR to -5000 cfs, per the Delta Smelt Biological Opinion.  Reclamation/Interior/CDWR management did not adopt this recommendation until 5 days later.  Exports were initially increased, and the OMR fell further to -10,323 cfs (see chart below) before export cutbacks started on 12/15, when the big surge of stormwater hit the Delta.  As a consequence of th surge, X2 on the lower San Joaquin River pushed downstream of km 90 after 12/17.  It is possible that some of the contingent of Delta smelt that were concentrated near X2 before 12/17 were drawn into the central Delta before OMR was limited.  It remains to be seen if the -5000 OMR limit will be adequate to protect what appears to be a potentially significant uptick in the Delta smelt spawning population compared to the past four years.  I wonder if these smelt were a consequence of last July’s outflow pulse.  Are Delta smelt potentially making a small comeback like water year 2010, when OMR December limits in the 2009 Delta smelt biological opinion were first put in place? Combined flow in Old and Middle River in the central Delta. Minus flows represent the effects of Delta exports from the south Delta. Exports were cut from 11,000 cfs to 7500 cfs on 12/16-17. 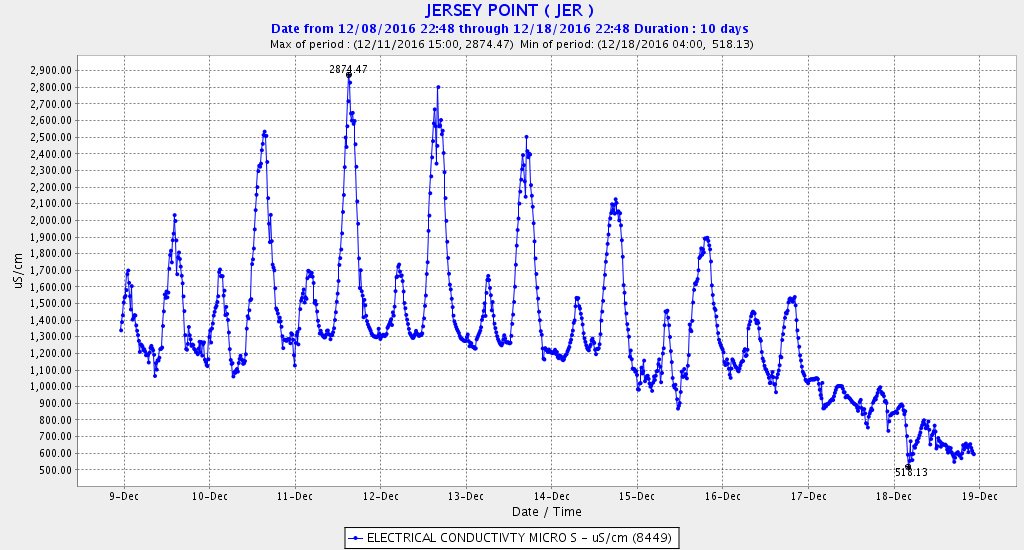 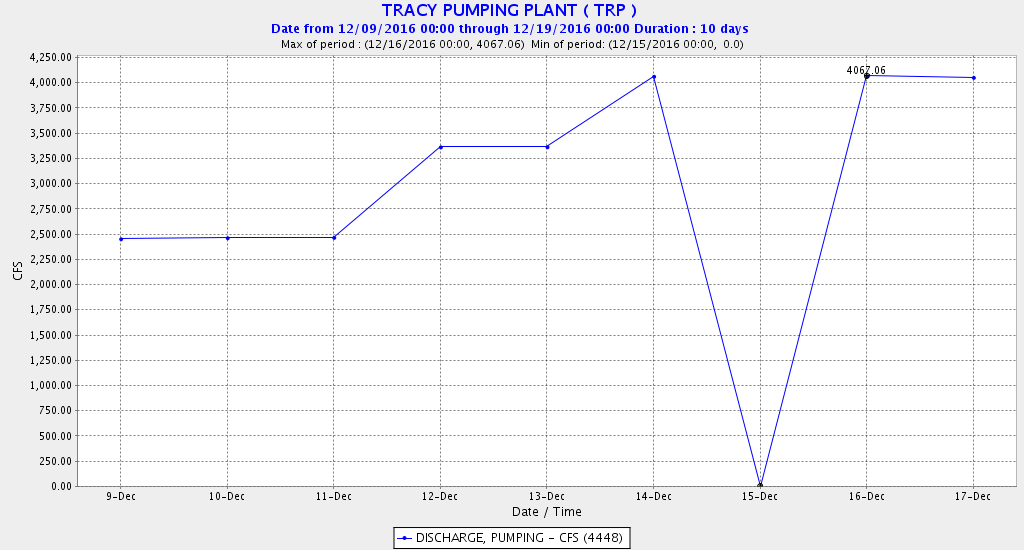 Last winter I warned about DWR jumping the gun on December Delta exports before storm runoff hit the Delta (Whoa on the Delta Exports DWR). Well they have done it again. Knowing full well that this year’s few remaining smelt and winter -run salmon smolts are in or soon to be in the Delta, DWR has ratcheted up Delta exports several days before the anticipated storm runoff hits the Delta (Figure 1 and 2). Their action has resulted in the movement of the Low Salinity Zone, X2, and brackish water upstream into the Delta. Old and Middle River (OMR) flows toward the south Delta export pumps have increased to their near maximum of -10,000 cfs (Figure 3), which draws brackish water from the Bay up into the Delta (Figure 4). The influx of brackish water is detrimental to water supply and fish habitat. Furthermore, high exports and negative OMR flows can draw juvenile salmon and adult smelt to the south Delta export pumps.

Constraints on OMR negative flows for winter-run salmon do not kick in until January. December limits on exports do not apply until salvage numbers of salmon rise. Salvage has not increased this year because the number of wild smolts produced is very low and hatchery smolts have yet to be released.

OMR constraints for Delta smelt should kick-in in December under present circumstances according to the Smelt Biological Opinion:

Low-entrainment risk period: delta smelt salvage has historically been low between December 1 and December 19, even during periods when first flush conditions (i.e., elevated river inflow and turbidity) occurred. During the low-entrainment risk period, the SWG shall determine if the information generated by physical (i.e. turbidity and river inflow) and biological (e.g., salvage, DFG trawls) monitoring indicates that delta smelt are vulnerable to entrainment or are likely to migrate into a region where future entrainment events may occur. If this occurs, the Service shall require initiation of Action 1 as described in Attachment B. Action 1 shall require the Projects to maintain OMR flows no more negative than -2,000 cfs (14-day average) with a simultaneous 5-day running average flow no more negative than -2,500 cfs to protect adult delta smelt for 14 days.

The Smelt Working Group met on December 5 and determined:

The Working Group reviewed present Delta conditions and observed a lack of recent data regarding species distribution. The Working Group did not make a recommendation for OMR flows The SWG will monitor hydrology conditions and ongoing surveys this week and will reconvene to for the protection of Delta Smelt adults. However, members are concerned regarding today’s OMR flow (daily average of approximately -10,000 cfs) and how it could influence the future distribution of the species. .. The SWG expressed concerns regarding the current OMR flow (~-10,000 cfs), but with the expected reduction later in the week to -7,000 to -8,000 cfs, influence of the pumps would be expected to decrease.

Since there are few if any Delta smelt remaining in the Bay-Delta, it will be difficult to assess risk. Given that the OMR had fallen below -9,000 cfs after the December 12 meeting because of near maximum south Delta exports, we can only assume those present at that meeting determined the assessed risk to be low. We can also assume that Interior and the state are no longer concerned with the fate of Delta smelt, as they obviously have not been able to find any in their early surveys. 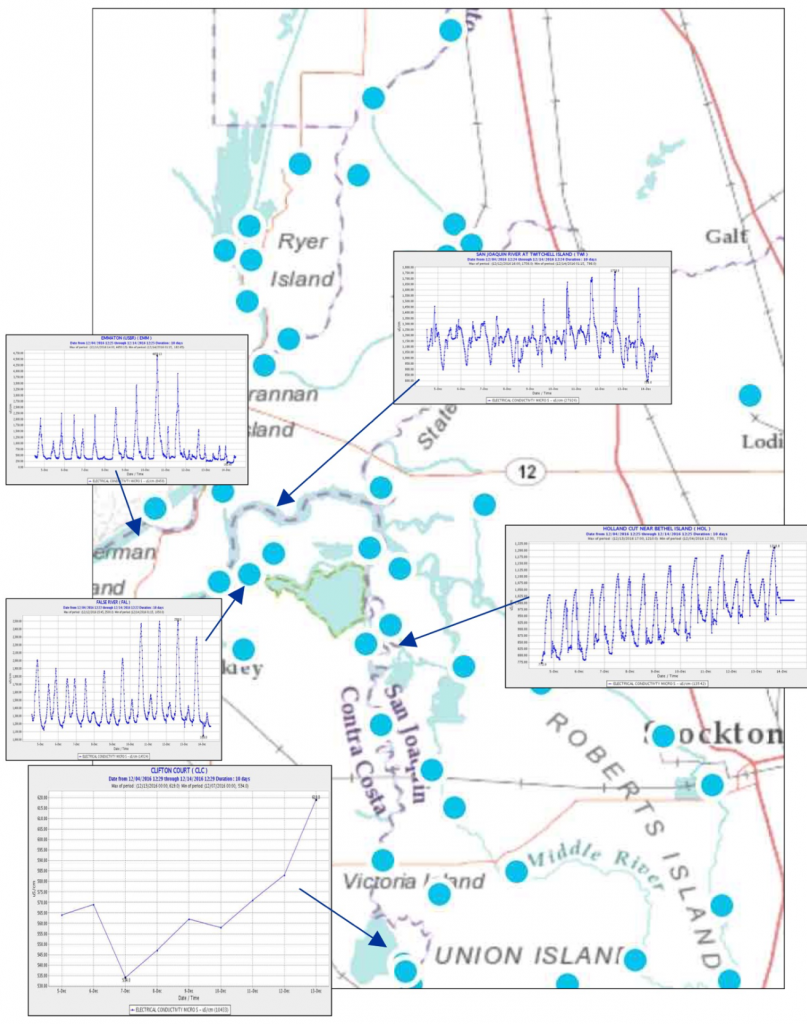 In previous posts, I described the poor status of longfin smelt in the Bay-Delta estuary.  In my last longfin post in April, I recommended a higher prescribed June Delta outflow, but none occurred.  June outflow was a bare minimum daily 7000 cfs.  As it turns out, it may not have done much good because there were simply too few spawners available this year (Figure 1).  The Fall Midwater Trawl Index (Recruits) was at a record low as in 2015.  The spawner indices for 2017 and 2018 will be less than 0.6, which is so low that few if any recruits will be produced. 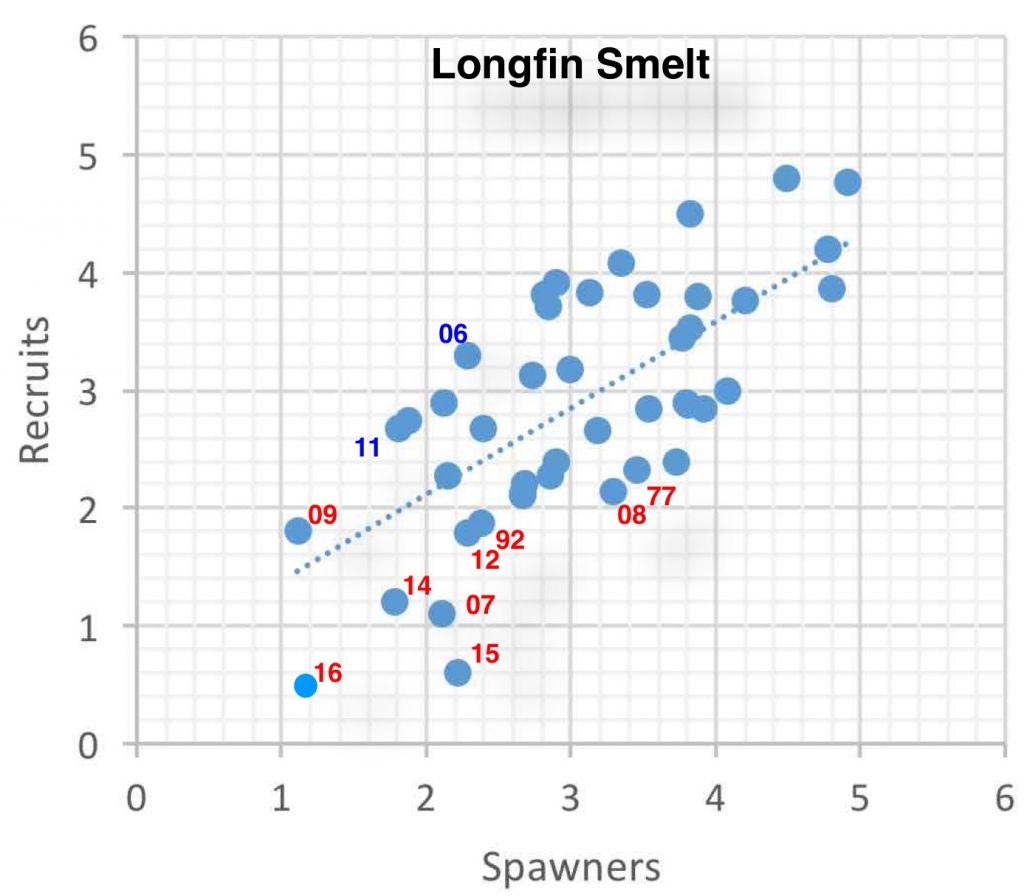 Figure 1. Longfin Recruits (Fall Midwater Trawl Index) vs Spawners (Index from two years prior) in Log10 scale. The relationship is very strong and highly statistically significant. Taking into account Delta outflow in winter-spring makes the relationship even stronger. Recruits per spawner are dramatically lower in drier, low-outflow years (red years). The low recruitment in 2015 and 2016 does not bode well for future recruits in 2017 and 2018: it is likely that the values will be closer to 0/0.

Senator Feinstein has added a rider to the Drought Water Bill that has been referred to as a “poison pill” for endangered salmon and smelt. Senator Boxer has vowed to fight passage of the Water Bill because of Feinstein’s “poison pill” rider. Senator Feinstein has claimed that the rider is a compromise to get support for the overall water bill that includes provisions to enhance California’s water supply infrastructure.

“Even amid heavy storms, only 852,000 of the 5.5 million acre-feet of water that flowed into the Delta during the first two months of this year—enough to sustain nearly two million acres of farm land—was sent south. The rest drained into the San Francisco Bay due to a lack of surface storage in the Sierras and pumping restrictions ostensibly intended to protect endangered species…. The Feinstein rider would give regulators some discretion to increase pumping to a little less than half of capacity.” Wall Street Journal article.

Senator Feinstein’s rider would allow weakening of provisions in the federal salmon and smelt biological opinions that restrict Delta export pumping from December to June (Figure 1). The rider would allow more Delta export pumping during periods of higher Delta outflow, as in the two storm periods shown in Figure 1 (bottom chart). Even if this weakening only allowed increased exports up to 50% of capacity, exports could be raised to approximately 13,000 acre-ft per day from the present 2500 to 10,000 acre-feet per day limits under the biological opinions (the amounts vary with the immediate risk to species). These risks would be substantial and would further jeopardize winter-run salmon, spring-run salmon, green sturgeon, steelhead, Delta smelt, and longfin smelt. All of these species depend heavily on the Bay-Delta during the times of year in which the current biological opinions potentially restrict exports.