Past summer surveys in the Cache Slough, Liberty Island, and Deepwater Ship Channel areas of the northern Delta frequently collected Delta smelt. Some documents even referred to this area as the last refuge of Delta smelt.

“The southern end of the Yolo Bypass, including Liberty Island (Table 9-2), Cache Slough, and the DWSC are known to support Delta Smelt spawning and rearing (Bennett 2005) (Grimaldo et al. 2004). The USFWS found Delta Smelt in shallow water habitats within Liberty Island using a variety of fish sampling techniques (Figure 9-1). Delta Smelt catch and gonadal staging from fish collected from the Spring Kodiak Trawl (SKT) surveys also indicate that the DWSC is an important spawning location in the Delta (Figure 9-2). Additionally, a non-migratory contingent has been recently observed to remain in freshwater and carry out their entire lifecycle in the tidal freshwater region of the CSC, which offers cool, turbid habitat and abundant prey (Sommer et al. 2011). DWR 2015 1

Surveys picked up some Delta smelt in the northern Delta even in the 2012-2015 drought years. In fact, most of the few smelt detected in those years came from this area.

However, the 2016 Summer Townet surveys caught no smelt in the northern Delta’s Cache Slough area at all. The extreme water temperature conditions present in 2012-2015 (August water temperatures in the 23-26°C range, near lethal to smelt) occurred again this summer (see chart below).

One Delta smelt was caught this summer downstream of the Delta, in Grizzly Bay at the mouth of Montezuma Slough.  There is at least one Delta smelt left.  Hopefully, the Fall Trawl Survey will collect a few more. 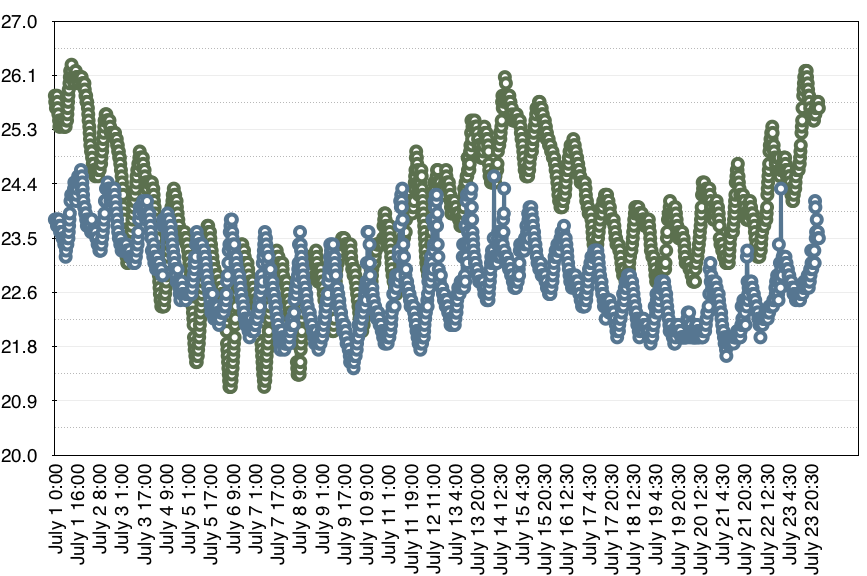