I left my last post on the longfin smelt decline questioning the possible role of negative changes to the Bay ecosystem in the decline of longfin smelt. Like Delta smelt, the long term decline in longfin is most certainly related to poor outflow and high exports characteristic of dry years. Dry years definitely lead to poor longfin yearly production as can be seen in Figure 1. Years 72, 76-77, 81, 87-92, 94, 03-05, 07-09, and 12-15, all historic dry years, have produced poor longfin indices.

The long term downward trend in wet year production (82 to 86, to 95 to 00, to 06 and 11) is a clear indication that the population is collapsing and moving toward extinction. The record low numbers in drought years 07, 14, and 15 are a further indication of a population collapse.

But the most ominous sign of possible extinction is in the first indication of reproduction failure after the record low fall indices in 2014 and 2015. Figure 2 shows the very low juvenile indices in 2015 and 2016 compared to earlier years. Figure 3 shows the relatively high catches in 2013 that lead to the higher index in 2013. Figures 4 and 5 show the catch distribution in 2015 and 2016, with catches nearly two orders of magnitude below those in 2013.

The likely cause of the poor 2015 and 2016 March indices (Figure 2) is the low numbers of spawners (as indexed from the Fall Midwater Trawl Survey (Figure 1). There were simply too few eggs laid in winters 2015 and 2016, a clear indicator of population collapse. So what is the reason for the very low indices (and low numbers of spawners) in fall 2014 and 2015, compared to 2012 and 2013? All four years were drought years. There are several possible reasons.

First, the numbers of adult longfin along the coast outside the Bay that contribute to the spawning population may have been depleted after years of poor recruitment from the Bay and poor ocean conditions. The very low numbers of Longfin captured in the summer in the Bay trawls support this theory.

Second, unusually poor survival of young in the eastern parts of the Bay and in the western Delta in spring and summer 2014 and 2015 may have contributed to poor recruitment into the fall-winter spawning population. The poor catch in the Summer Townet Survey in 2014 and 2015 compared to 2013 (Figures 6 and 7) supports this theory. Undoubtedly, the weakening of water quality standards in spring-summer 2014 and 2015, which led to extremely low spring-summer Delta outflows to the Bay and extreme salinity levels and warmer waters in the eastern Bay nursery area of Longfin Smelt, was a substantial cause of this unusually poor survival. 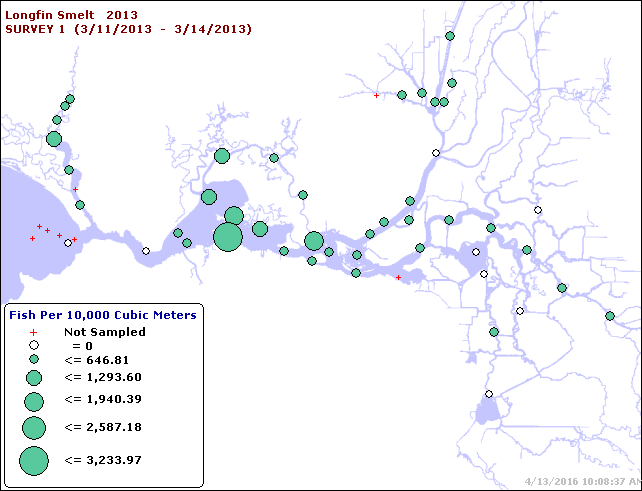 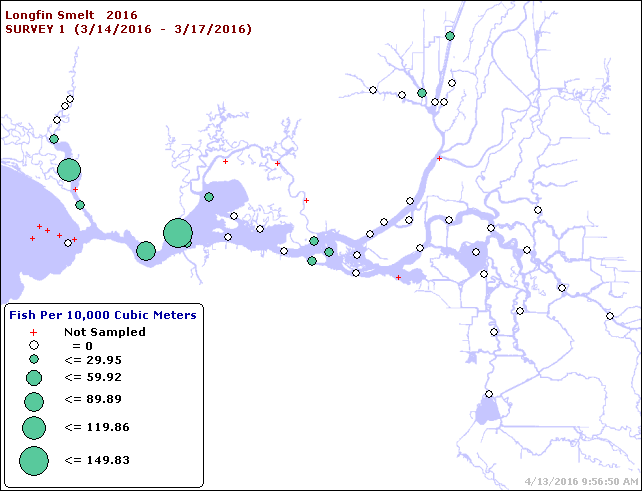 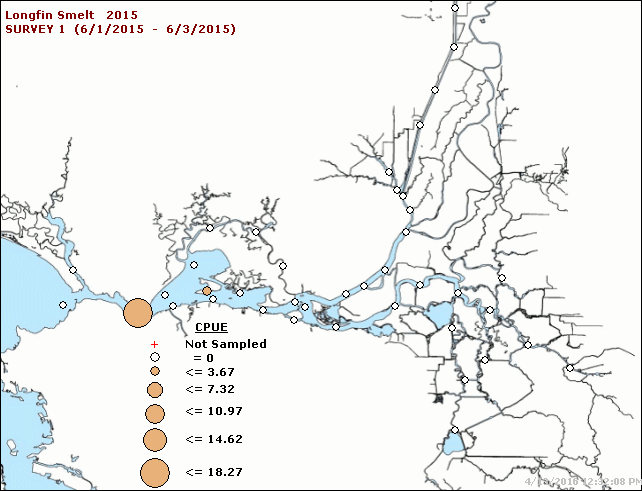