The Symposium on the possible extinction of smelt held on March 29, 2016 offered no real solutions or solid recommendations for recovery of the two smelt species on the brink of extinction.  My own presentation focused on the cause of the population crash of Delta Smelt, not prescriptions for recovery, which had been a topic of some of my previous posts on smelt in this blog.  The panel discussion at the end of the day of presentations brought out mostly old ideas and restoration strategies that have been unsuccessful over the past 40 years. There was little hope and a lot of pessimism from the panel.  Some panelists recalled that estuary flows and exports are likely important factors, but also lamented that these are hard to change.  Specific panelists held out hope that restoring wetlands and marshes, increasing aquatic food abundance, and reducing toxins might bring the smelt back under present water management.  With that background, I thought I should add my own suggestions for how to proceed during the year that may be our last opportunity to help smelt (Figure 1). 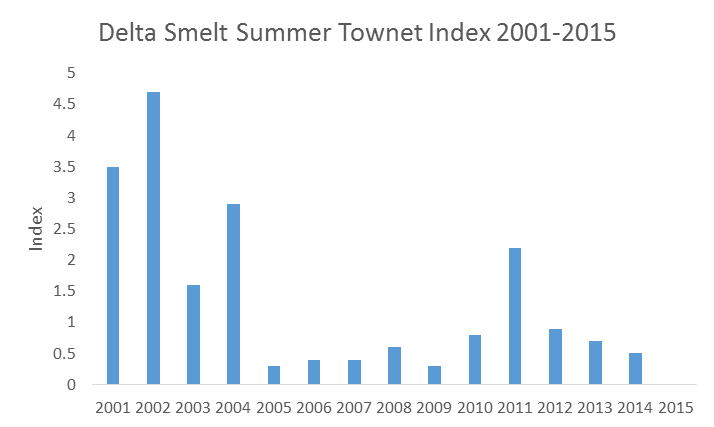 This year is a wetter year, not unlike the recovery year 2010 (Figure 1).  So if there is the same level of protection as in 2010, smelt might show signs of recovery with a positive response to good conditions.  However, if they do not respond favorably, it would suggest that Delta smelt need more drastic actions to prevent extinction. Below I describe the basic protections provided in 2010, recommend added actions, suggest several still more drastic prescriptions, and recall planned long-term actions that need to get moving. 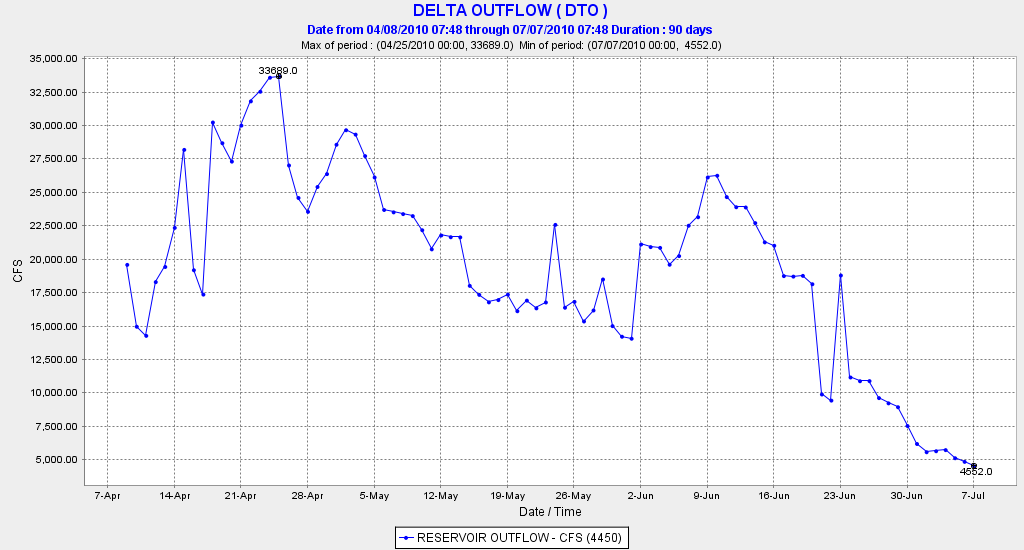 Prescription 1 – Limit Spring Exports as in 2010

Year 2010 had relatively good spring Delta outflows (Figure 2).  So far, April, 2016 has also started modestly not unlike 2010, with Delta outflows between 20,000 and 40,000 cfs..  Unless there is more rain, we can expect a sharp drop in outflow later in April this year as reservoir flood control releases cease.  This would create flow conditions similar to those of 2010.   Given the likely releases from storage combined with declining runoff,  it would be reasonable to consider the actions prescribed in 2010 to protect smelt as a place to start this year: limit exports to about 1500 cfs.  There will be strong pressure soon to increase exports to the maximum allowed under the biological opinions (5000-6000 cfs) unless the US Fish and Wildlife Service accepts the recommendation of the Smelt Working Group and limits exports. The Service limited exports in 2010.  It has also largely done so in March and early April, 2016, to protect larval Delta Smelt that were observed in surveys in the lower San Joaquin River.  A low level of export of 1500 cfs and -1800 cfs OMR would be consistent with actions in April in 2010  (Table 1).  A low level of export may also be prescribed by NMFS to protect salmon and steelhead in April and May.

A continued low export prescription of a 2500 cfs limit through May 2010 was likely protective until such time as young smelt were able to transport downstream from Delta spawning grounds to the low salinity zone rearing area located in Suisun Bay under the 15,000-20,000 Delta outflows.  Figure 3 shows the continued presence of Delta smelt in the Delta during May 2010.

By June many smelt had reached the eastern Bay out of the influence of the export pumps (Figures 4 and 5).  Exports of 6300 cfs and -5000 OMR1 allowed under the Smelt Biological Opinion appeared to be protective in June 2010 as long as outflows were above 10,000 cfs.

Table 1.  Monthly average export rates and OMRs in spring 2010, the year following the drought years of 2007-2009 which exhibited some smelt recovery. 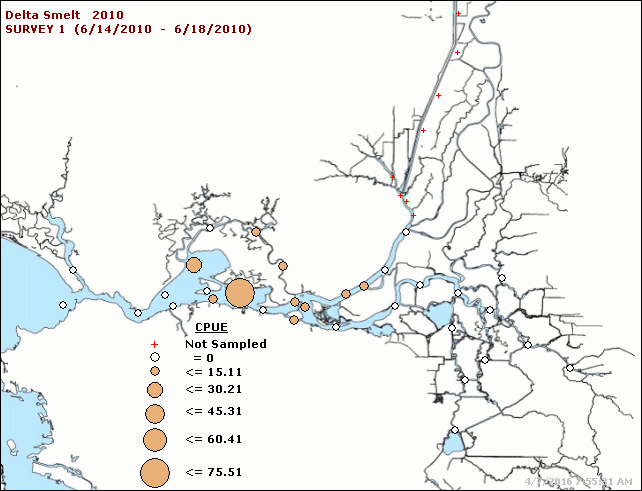 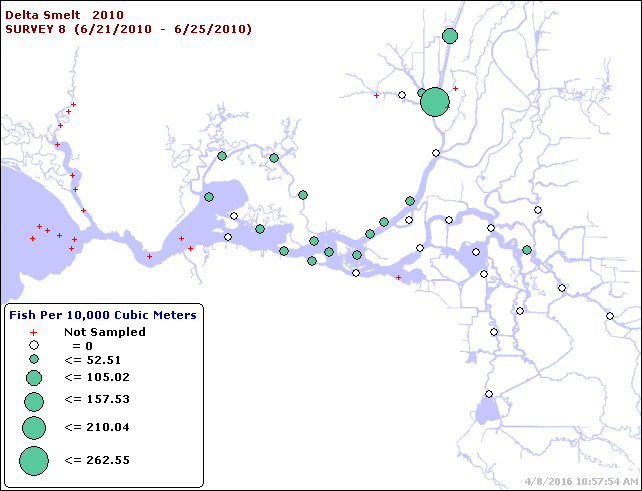