The Klamath River Chinook salmon fall run is expected to be a record low in 2017.1 Predictions are near or below the record low run in 1992. These record low runs followed extended droughts from 2013 to 2015 and 1990 to 1992, respectively.

A very low run in 2016 prompted the Yurok Tribal Council to cancel its commercial fishing season to protect future fish populations. The 2016 salmon allocation was the second lowest on record, and failed to provide each tribal member a salmon. The Tribe did not serve fish at the annual Klamath Salmon Festival for the first time in the event’s 54-year history. In January 2017, the federal government issued a disaster declaration for the 2016 Yurok Tribe fishery.2

An April 6, 2017 article in the Eureka Times Standard stated:

The disaster stems from a crash of Klamath salmon stocks, but in order to protect the few Klamath fish that are in the ocean, fisheries regulators have little choice but to close or nearly close the economically valuable commercial and sport fishing seasons along the length of the Northern California and Oregon coastlines. This will impact tribal and non-tribal families alike.

CDFW stated: “Chinook that will be harvested in ocean fisheries in 2017 hatched two to four years ago, and were deeply affected by poor river conditions driven by California’s recent drought.”

A UC Davis study placed some of the blame on hatcheries. “My results suggest that hatcheries’ harm to wild salmonids spans the entire Klamath River basin. For fall Chinook salmon, the decline is concurrent with increases in hatchery returns – a trend that could lead to a homogenous population of hatchery-reared Chinook”.

Having been involved in the Klamath River for 40 years, I provide some of my own insights in this post. In follow-up posts, I will take a closer look at the Scott and Shasta rivers, the two main salmon tributaries of the upper Klamath that contribute substantially to the overall upper Klamath salmon run.

A summary of the overall Klamath salmon run escapement numbers or spawner estimates for the past 40 years is shown in Figure 1. The spawning numbers in 2016 were low, yet this drop came only two and four years after near record runs. Contributions for all six upper Klamath subcomponents in 2016 were down substantially from 2014. Predictions of a poor run in 2017 come from the low number of two-year-old “jack” salmon in the 2016 spawning run.

A close look at the spawner-recruit relationship (Figure 2), how recruits are related to the number of spawners three years earlier, provides further insight into factors controlling long-term recruitment.

Overall, the droughts of 1990-1992 and 2013-2015 (Figure 3) were likely the single most important factors in the upper Klamath Chinook salmon population dynamics. The role of the Irongate Hatchery contributions seems relatively stable and a likely important contributor to recoveries after drought. I was unable to determine the contribution of hatchery salmon to the other components of the run, but it is likely a large factor in the Bogus Creek and upper Klamath elements. It is possibly a lesser factor in the Salmon, Scott, and Shasta river elements, which speaks to the importance of these potentially “wild” runs.

In closing, some thoughts on potential solutions: 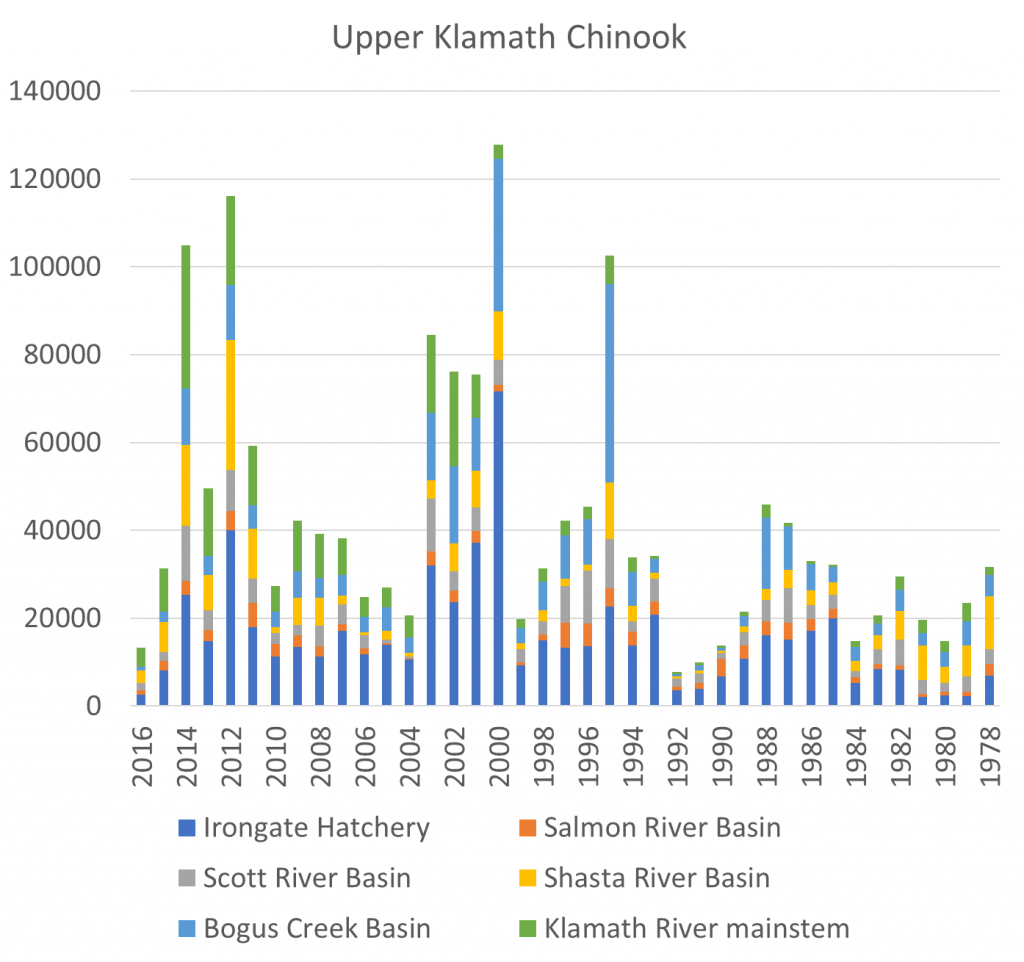 Figure 2. Spawner-Recruit relationship for upper Klamath River fall-run Chinook salmon population. The number is the transformed (log10X – 3.5) escapement estimate for the fall of that year as shown in Figure 1. The color represents winter-spring hydrology conditions in the Klamath River two years earlier when this brood year was rearing in river habitats. Red is dry, green is intermediate, and blue is wet (from Figure 3). Circle color represents late summer water year conditions in numbered year. For example: year 92 represents the recruits in fall 1992 from brood-year 1989 spawn that reared in 1990 winter-spring (red dry year); the red circle represents dry conditions in late summer of that water year (1992). Note that the spawning run for 2002, the year the large die-off of adult salmon occurred in the lower river due to low flow and high water temperatures, likely contributed to the poor returns (recruits) in 2004 and 2005. 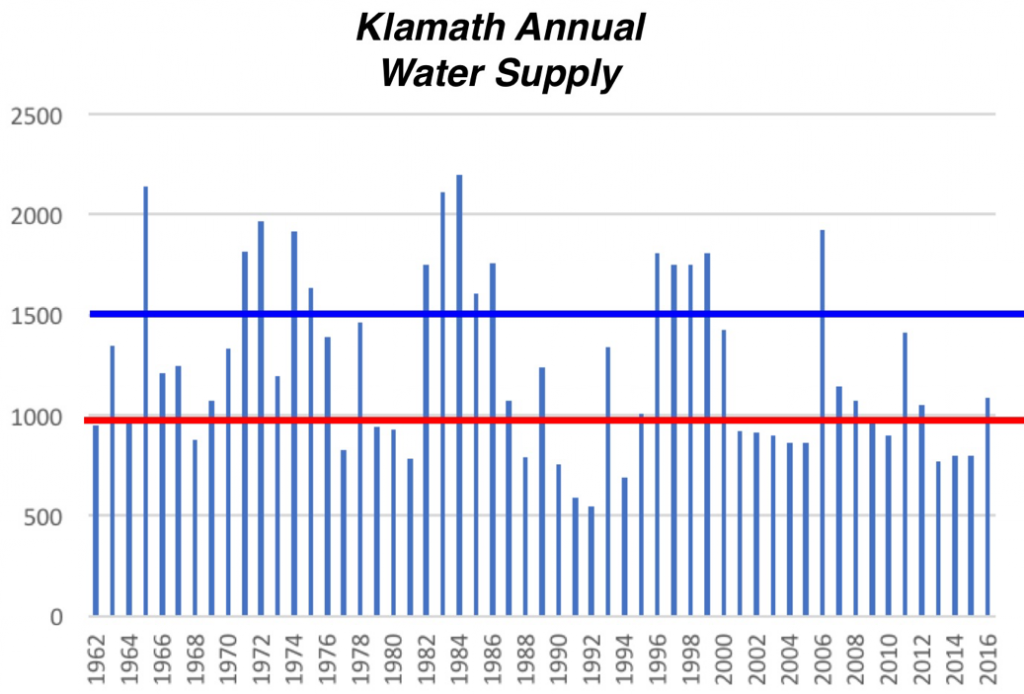 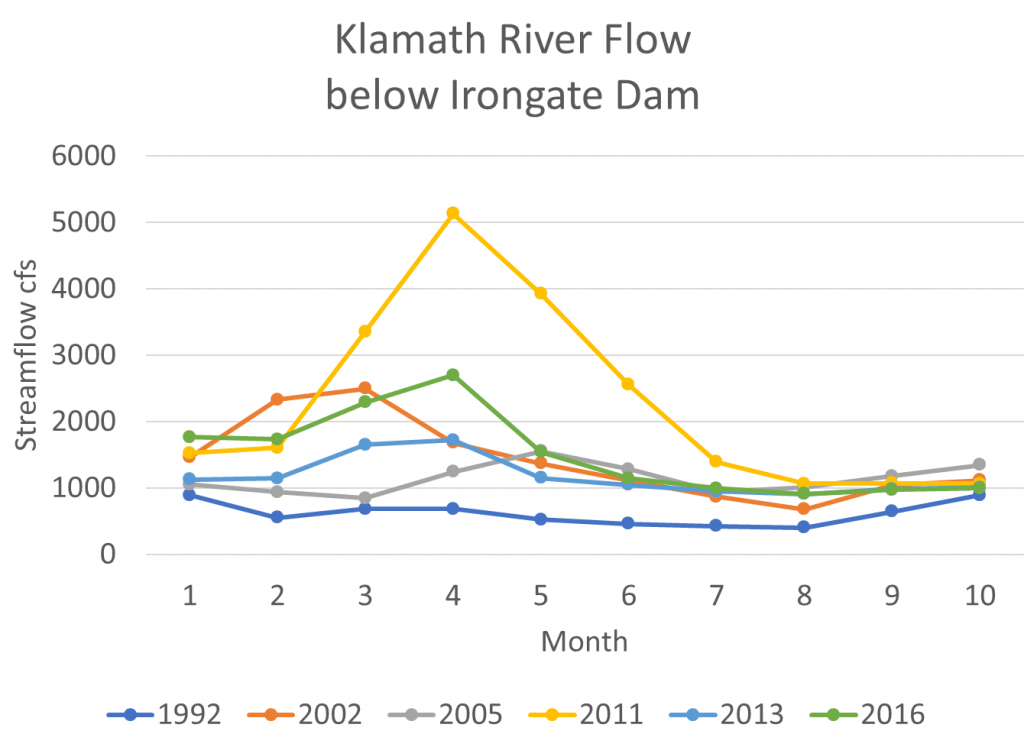