Over the past few months, I have written posts on the status of specific runs of salmon in rivers throughout the Central Valley.  In this post, I describe the overall status of salmon runs and  recommend general actions to take to increase runs as well as commercial and sport fishery harvests.  The subject is timely given a poor prognosis for the 2017 salmon runs.

It was just a little more than a decade ago at the beginning of the century that there were nearly one million adult salmon ascending the rivers of the Central Valley (Figure 1).  At the same time, there were a million more Central Valley salmon being harvested each year in sport and commercial fisheries along the coast and in the rivers of the Central Valley.  Improvements in salmon management in the decade of the 1990s by the Central Valley Project Improvement Act, CALFED, and other programs had paid off handsomely with strong runs from 1999 to 2005.  New and upgraded hatcheries, combined with the implementation of  trucking hatchery smolts to the Bay, significantly increased both harvest and escapement to spawning rivers. By 2008-2009 escapement had fallen by over 90% to a mere 70,000 spawners of the four major Central Valley runs of salmon.  DFW and the Pacific Fishery Management Council greatly restricted fishery harvest of salmon beginning in 2008.  The winter run, the most threatened of the four runs, fell from 17,296 to 827 spawners in just five years.  Drier years from 2001-2005, poor ocean conditions in 2004-2005, record-high Delta water diversions, and the 2007-2009 drought were contributing factors in these declines.  Impacts to coastal communities and the fishing industries were severe.

Extraordinary recovery measures included closing fisheries and trucking most of the hatchery smolt production to the Bay or Delta.  Federal salmon biological opinions (2009, 2011) limited winter and spring water-project exports from the Delta.  The state and federal governments and others spent hundreds of millions of new dollars on habitat and fish passage improvements in the Valley to improve salmon survival and turn around the declines.  Figure 1 demonstrates that these efforts were somewhat effective in limiting run declines during the 2012-2015 drought, compared to the 1987-1992 and 2007-2009 droughts.

However, the prognosis for 2017 is again bleak.  The consequences of the 2012-2015 drought are about to fully play out.  Once again, projected runs are low and responsible fishery agencies are restricting harvest.  Managers once again must take action to minimize the long term effects and help bring about recovery.

Near-term actions over the coming year: 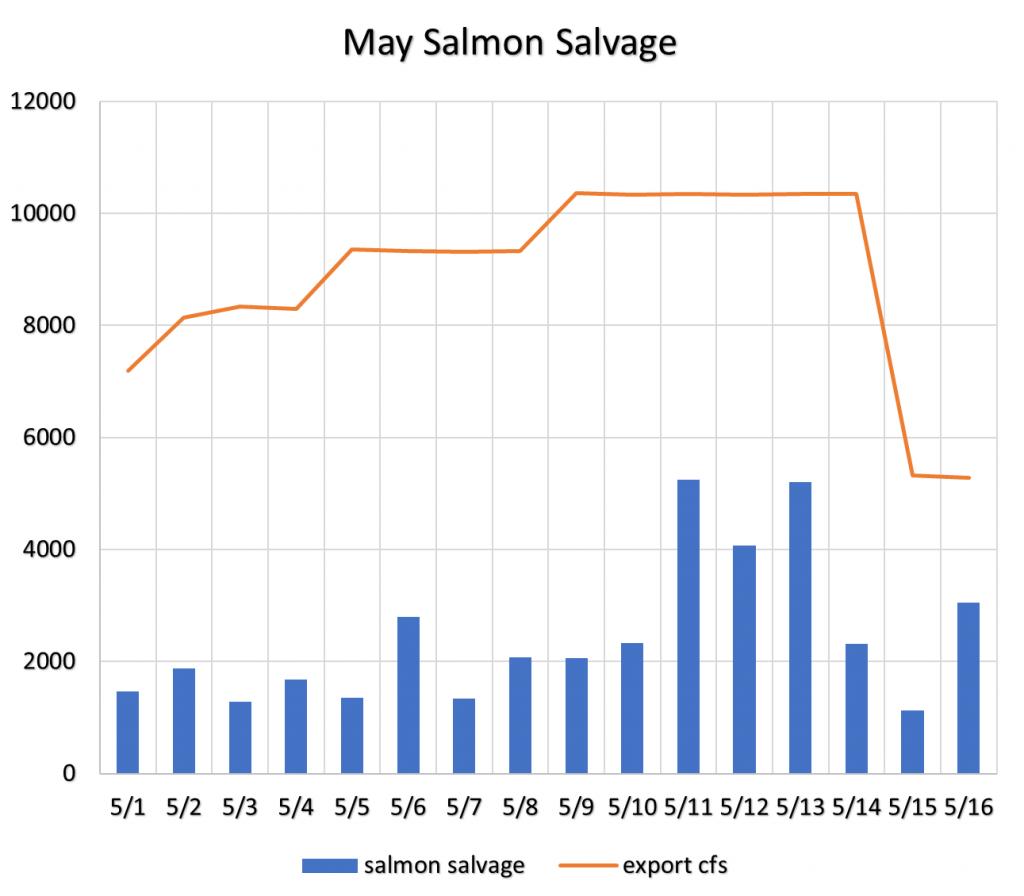 Figure 3. Export rate and young salmon salvage at South Delta federal and state export facilities in May 2017. The target export rate limit for May is 1500 cfs. Source of data: USBR.