In an October 11 post, I discussed the state of California’s decision to maintain fall Delta outflow to the Bay (Fall X2). The 2008 Delta Smelt Biological Opinion (BO) requires that the State Water Project and the Central Valley Project keep the low salinity zone (X2) at km 74, near Chipps Island, in the fall of wet years. In early October, 2017, Reclamation and DWR requested that the fisheries agencies waive this wet year requirement to allow greater south Delta exports. The US Fish and Wildlife Service approved. But several days later, the California Department of Fish and Wildlife found that the action did not comply with the California Endangered Species Act, and the California Department of Water Resources reduced its south Delta exports to maintain Fall X2 compliance.1

To help the state maintain compliance, Reclamation began weekday closings of the Delta Cross Channel (DCC) (Figure 1), opening the DCC only on weekends to facilitate boat travel (Figure 2). Closure of the DCC forces more of the Sacramento River flow down the north Delta channel (Figures 3 and 4) repelling salt intrusion in eastern Suisun Bay near Collinsville (km 81) (Figure 5). The closure occurred 10 to 12 weeks earlier than normal (usually December 15), a highly unusual and provocative manipulation of Delta hydrodynamics. Its continued application after November 1 changes the hydrodynamic effects. Now that the Fall X2 requirement has expired, Delta outflow is lower and exports are higher. Under these conditions, DCC closure contributes to greater salinity intrusion into the central Delta via the lower San Joaquin channel and False River, moving Low Salinity Zone and Delta smelt back toward the central Delta.

DCC closure also helps more Mokelumne River adult salmon better hone in on their home river by keeping Mokelumne water out of the Sacramento channel near and below the DCC.2 However, Sacramento River salmon that enter the Mokelumne forks when the DCC is open on weekends would be blocked and delayed when the DCC is closed during the week. Closing the DCC also reduces San Joaquin channel net freshwater flows (Figure 6), which may hinder migrations of Sacramento, Mokelumne, and San Joaquin river adult salmon migrating up the San Joaquin channel of the Delta.

A likely upside of this unusual manipulation of cross-Delta freshwater flow is that it serves to keep the Sacramento River channel of the Delta fresher, which is part of the intent of the Fall X2 requirement. This action has minimal cost to reservoir storage and Delta exports, and it reduces straying of returning Mokelumne River hatchery salmon. On the downside, these DCC operations disrupt Delta hydrodynamics and water quality, move the Low Salinity Zone into the central Delta threatening Delta smelt survival, and interrupt salmon migrations in the Sacramento and San Joaquin rivers. It is likely that the Delta’s adaptive managers neither monitored nor assessed these potential downside ramifications. Figure 1. Location of Delta Cross Channel in north Delta. (Base map from CDEC) 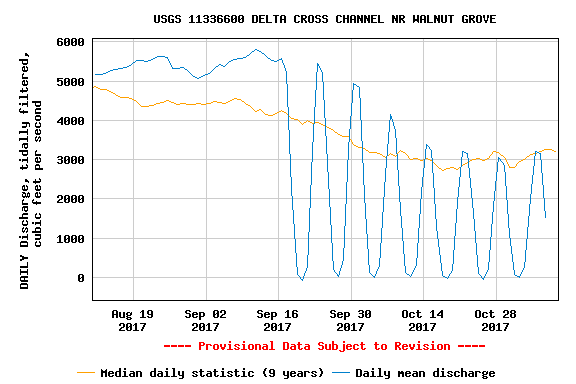 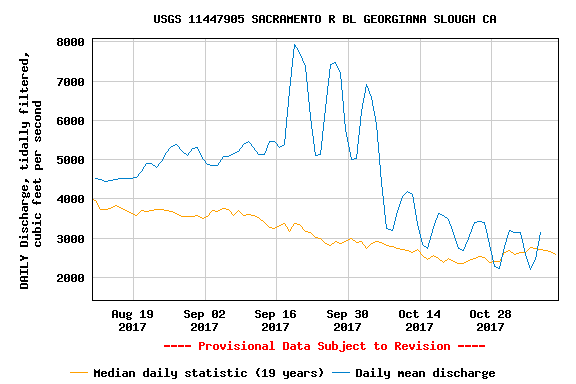 Figure 3. Weekday closure of the Delta Cross Channel in mid-September increased net flow downstream of the DCC in the Sacramento River channel below Georgina Slough. Figure 4. Weekday closure of the Delta Cross Channel in mid-September increased net flow downstream of the DCC in the Sacramento River channel at Rio Vista. 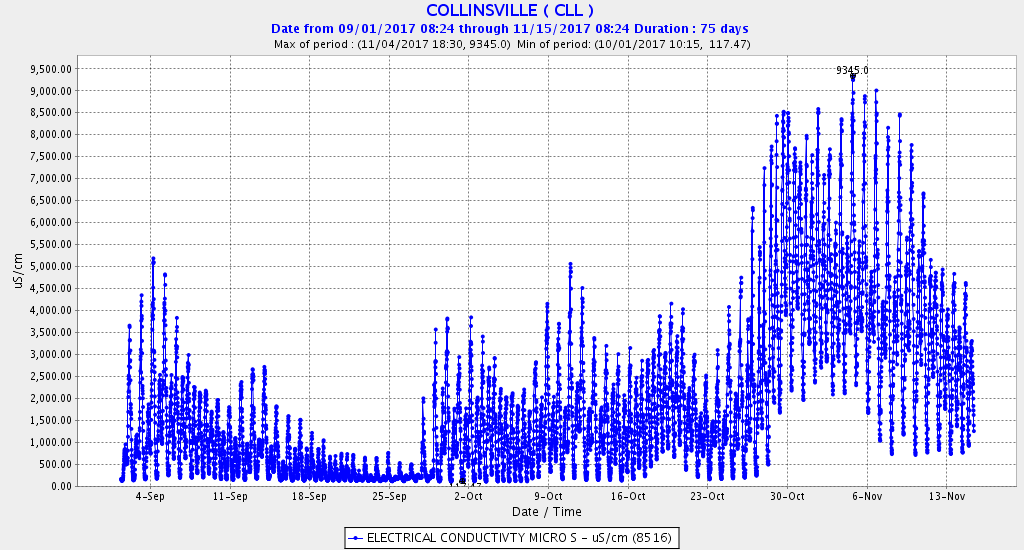 Figure 5. Weekly closures of the Delta Cross Channel helped to maintain Fall X2 below Collinsville (km 81) through October in 2017.